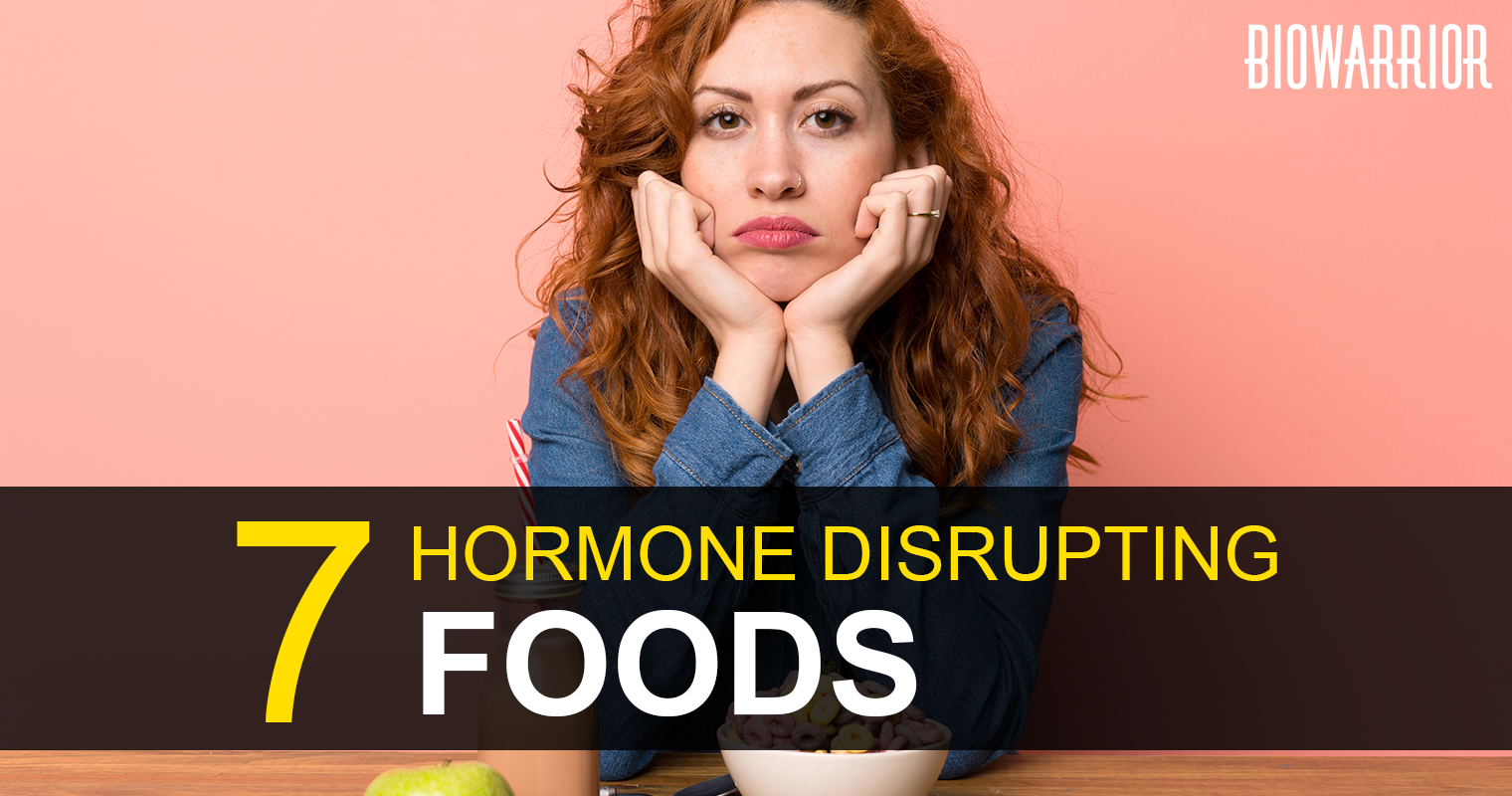 Did you know that the environment is filled with toxic chemical compounds called endocrine disruptors?

It's true, BPA (bisphenol A) is the most known and publicized. BPA is found in plastics, packaging, kitchenware, to the lining of canned foods, and even the thermal coatings of cash register receipts. It's been linked to health risks like female and male infertility, early puberty, hormone dependent tumors such as breast and prostate cancer and several metabolic disorders including polycystic ovary syndrome (PCOS). (1)

But did you know that BPA is just one of the countless chemicals that can block hormone pathways and disrupt our bodies' delicate hormonal systems?

One of the best ways to balance hormones is to eliminate hormone disrupters from entering our bodies. Good nutrition, lifestyle, and environment are key to wellness, however many people do not understand the dangers lurking in our everyday foods. Today we will break down the top 7 hormone disrupting foods to start avoiding today. 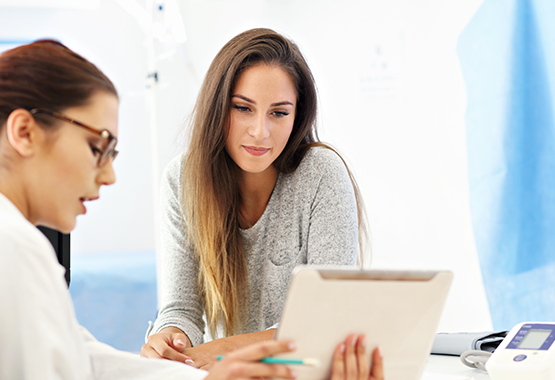 Humans have two systems of internal communication: the nervous system and the endocrine system. The endocrine system controls the delivery of messages through the release of chemicals known as hormones. Hormones are secreted directly into the blood by endocrine glands. Endocrine glands are found throughout the body and are responsible for releasing more than 50 hormones that control a number of essential functions in the body, including growth and development.” – American Chemistry Council (3)

What Are Endocrine Disruptors?

An endocrine-disrupting compound is any agent that interferes or blocks synthesis, secretion, transport, metabolism, binding, or elimination of natural hormones that are present in the body. (4) Essentially, an endocrine disruptor is anything that blocks your body from making or using hormones.

These compounds include endocrine-disrupting chemicals (EDCs), which are present in our food, environment, and numerous consumer products like shampoo's, fragrances, soaps, lotions, cleaning supplies and much, much more. The number of products which contain these (EDCs) is astonishing and could be contributing to the dramatic increase of adrenal fatigue and hormonal imbalances today.

Studies show that endocrine disruptors have an effect on levels of hormones such as estrogen, cause reproductive damage, infertility, hypothyroidism, cancer, and more. (4)

The endocrine system is responsible for:

Large components of the endocrine system include:

Other components of the endocrine system include the: 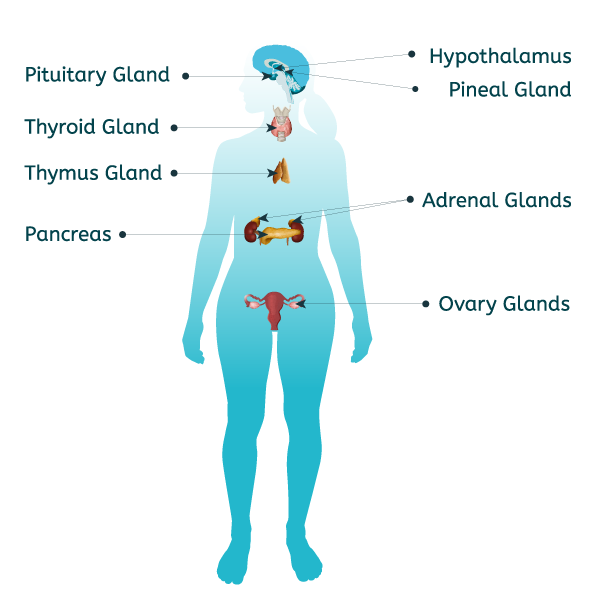 Factory raised animals are not the healthiest choice for good hormone health. They are fed an unnatural diet, locked in small cages, susceptible to disease and infections, injected with antibiotics, hormones, PCB's (polychlorinated biphenyls, which are industrial chemicals), and mercury. The majority, if not all factory farmers feed their livestock and fish GMO grains, which have been sprayed with glyphosate's (which have been shown to increase the risk for Non-Hodgkin Lymphoma by 41%). (5)

The United States Environmental Protection Agency conducted extensive research on the effects of mercury on the endocrine system and found the results damaging to human and animal life. The study found that mercury negatively affected thyroid health, adrenal systems, hormone concentrations, sex hormones, and the deregulating of enzymes in the steroidogenesis pathway. (6)

Also to note, the amount of antibiotics being administered to animals is alarming, so much so the CDC has announced the over consumption of antibiotics to be a national health threat. The overuse of antibiotics is creating antibiotic resistant bacteria known as superbugs responsible for killing 23,000 Americans every year. (7)

The overuse of antibiotics can also trigger autoimmune disease. When the gut is overloaded with antibiotics the good gut flora is destroyed leaving the individual with high amounts of bad bacteria triggering IBS, Acid Reflux, and Leaky Gut. (8) It is important to keep your gut flora healthy, by avoiding factory farmed meats & antibiotics.

Not all meat is unhealthy.  Organic, grass-fed, free range, and wild caught meats  include essential vitamins, minerals, and fatty acids. When shopping for meats always check the label and make sure it is free of hormones, antibiotics, and GMO's.

Surfactants are used in the herbicide to penetrate the outer layer of the leaves of plants, so the glyphosate can be absorbed into the plant. These surfactants have been shown to cause cell death. (9)

Unfortunately, millions of Americans have been consuming GMO’s over the last 20 years without evening knowing because it is not required to label GMO food. A recent study has shown that glyphosate's, like the one's found in Roundup, has been linked to an increased risk of for Non-Hodgkin Lymphoma by 41%. (10)

Nightshades have been getting a lot of attention by doctors who deal with autoimmune diseases. Nightshades such as potatoes, tomatoes, peppers, and eggplant have been added to the auto-immune inflammation spectrum.

To keep it simple nightshades contain certain chemical compounds called alkaloids. These alkaloids can irritate the gastrointestinal system causing leaky gut and affecting neurotransmitters. (11) During times of stress, alkaloid compounds like solanidine can store in the body and may release during times of stress, to the detriment of the body. (12)

Is it best to avoid nightshades all together? That's possible, especially for those experiencing any sensitivities to nightshades vegetables similar to those related to a gluten sensitivity like:

In 2002, a published study concluded that mice fed potatoes, which contain glycoalkaloids, aggravated, or may have been a catalyst for symptoms for the mice predisposed to IBD. They also went on to say that eating potatoes can adversely affect the mammalian intestine and can aggravate IBD. (13)

For those who suffer from an autoimmune disease, it may be smart to determine if nightshade vegetables are responsible for or contributing to the triggering of inflammation in the body and the symptoms.

Processed sugars can really disrupt your hormones by spiking insulin levels. Insulin is a hormone that is responsible for allowing glucose in the blood to enter cells, providing them with the energy to function. A lack of effective insulin plays a key role in the development of diabetes. The body needs a balanced intake of sugars, proteins, and fats to create energy.

When the cells cannot absorb glucose, levels of this sugar build up inside the body. If blood sugar levels are higher than normal  but not high enough to indicate diabetes, doctors have referred to this as prediabetes. People with high insulin resistance often develop prediabetes. (14)

If you love sugar don't worry there are some excellent alternatives that are much lower on the glycemic index. Instead of processed sugars opt for a more healthy sugar substitutes like dates, grade A maple syrup, green leaf stevia and raw honey.

If you have been on the fence about going dairy-free now may be a good time to do so. Recent data from scientific studies are indicating that the presence of steroid hormones in dairy products could be counted as an important risk factor for various cancers in humans. (15)

Conventional dairy is loaded with antibiotics, growth hormones and animal derived hormones like estrogen. These estrogens may further disrupt hormonal imbalances and increase the risk of symptoms of adrenal fatigue.

Another reason to stop consuming conventional dairy is that is has been found to be a carcinogen (a substance capable of causing cancer in living tissue.) A study completed in 2000, found that the 20% increase in milk consumption and the incidence rate of prostate cancer in Japan is growing at the fastest rate in the world. (16)

Unfermented soy can disrupt hormones by acting as an estrogen (phytoestrogen), therefore blocking real estrogen from binding to receptors. When estrogen levels are off balance other hormones like testosterone are thrown off as well. The high levels of phytic acid in soy reduces assimilation of calcium, magnesium, copper, iron and zinc. Soy phytoestrogens disrupt endocrine function and have the potential to cause infertility and to promote breast cancer in adult women. Soy phytoestrogens are potent anti-thyroid agents that may lead to hypothyroidism and thyroid cancer. (17)(18) (19)

Alcohol affects the brain which leads to an interference with the hypothalamus and pituitary gland also known as the part of the brain that tells the body to produce hormones as needed.

"Chronic consumption of a large amount of alcohol disrupts the communication between nervous, endocrine and immune system and causes hormonal disturbances that lead to profound and serious consequences."(20)

The endocrine system is one big system in which when one hormone is affected all other hormones are affected as well. Alcohol reduces testosterone production leading to lower energy levels in both men and women. Reduced testosterone also reduces fertility in men. Alcohol also augments insulin secretion causing a disruption in blood sugar levels. Alcohol also increases cortisol levels triggering an increase in belly fat and an inability to deal with common stressors. (21)

TAKE BACK YOUR HEALTH AND YOUR LIFE!

For all general inquiries, email us at: info@biowarriornutrition.com